July 21, 2021 – San Bernardino, CA: San Bernardino International Airport (SBD) experienced significant increases in annual air cargo activity in 2020 which outpaced growth nationally, according to data released recently by the Federal Aviation Administration. Boosted by the rapid growth of its partners, SBD continues to rise in the rankings of airports serving all-cargo aircraft throughout the United States. 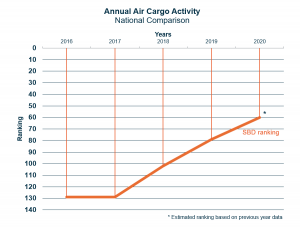 In 2020, air cargo landed weight at the Airport rose to 471,000,000 pounds, representing an increase of 34% over the previous year, and 164% greater than 2018 activity. Nationally, SBD continues to outperform among the 130-140 airports in the U.S. serving all-cargo aircraft. According to data reported annually by the FAA, which the agency released last month, SBD climbed to the 59th position in the United States, up from 79th in 2019 and 102nd in 2018.

“Enabling companies to fast-track deliveries while offering them an attractive cost structure in a highly competitive market has proved to be a winning strategy for both the Airport and its partners,” says Mark Gibbs, the Airport’s Director of Aviation. “In 2016, cargo activity totaled just 36 flights. Today, SBD consistently ranks as one of the country’s top airports for air cargo growth due to its unmatched convenience, expansive infrastructure, and prime location in the Southern California marketplace.”

With updated infrastructure and business investments that support daily, large-scale air cargo operations, SBD helps speed time-sensitive goods to their final destinations. The Airport is chosen by cargo giants for its proximity to Southern California’s Inland Empire with an estimated 4.7 million consumers and the greater Los Angeles basin with convenient access to multiple highways surrounding the Airport. Its Group VI runway easily accommodates the world’s largest aircraft, while skilled and certified staff and specialized equipment ensure quick cargo handling and efficient turn times. On-site U.S. Customs service expedites clearance for international aircraft, and facilities include bonded storage and access to a foreign trade zone. An adjacent 2,000-acre commercial business park is home to leading companies including members of the Fortune 50, 100, and 500.

About SBD International Airport: Located approximately 60 miles east of Los Angeles and within 30 minutes of more than two million people, the former Norton Air Force Base was converted to civilian use in 1992 and later became certified as a commercial airport by the FAA. The Airport offers a full range of services and facilities to support air cargo operations, general aviation, and maintenance repair and overhaul (MRO) businesses. SBD is positioning itself to provide domestic and international passenger service. www.sbdairport.com

Polished, Sophisticated, and Welcoming Portal
to the Airport and the Inland Empire Community